Parrot drone rolling spider is easy to pilot quadcopter that is a small, compact, stable drone for a beginner. Amazingly it is the latest smartphone controlled drone with the most reasonable price. Furthermore it is an excellent indoor flyer that is lightweight and easy to fly outside.

The mini parrot drone rolling spider has expansive prop guards. Thus it remains protected even in rougher crashes. And there are still so many exciting features are waiting for you. So have a look below-

Key Features – (At a glance)

You can call this “Parrot Rolling Spider”, a tiny toy with big potential. In inside, the rolling spider has a 3-axis accelerometer, 3-axis gyroscope, an ultrasonic sensor. In addition to this, a great combination of a pressure sensor and a vertical camera comes with this to make flight very stable.

Therefore the mini parrot drone rolling spider has several wheels. And those are called the rolling part of the drone. When you attach the wheels to the top of the spider, it will prepare to drive. Rather you can drive it up a wall and across the ceiling or around the ground. Well, so many fun, it’s also important to ensure they must give some protections to the propellers. Especially when you are more intend to fly it around indoors.

Now know about what stuff are coming with this beautiful parrot drone rolling spider. You will get one battery, a micro USB cable, some stickers along with the mini drone and wheels. Probably you need to buy more propellers. Because you’ll get only one set with the rolling spider in the box. 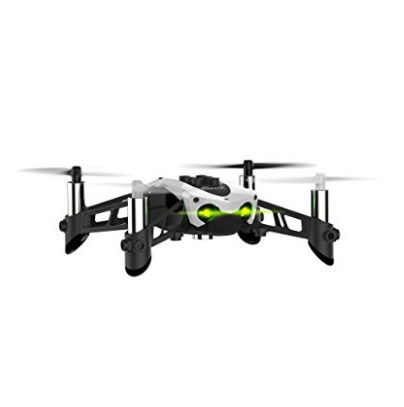 The Great Performance of It

The most highlighting feature is the Parrot drone rolling spider comes with a wheel shaped prop guards. Hence the wheels help to protect the drone’s propellers and internal components.

Actually, if you notice properly, you can see on the top of the drone the wheels attach to the surrounding of the body. There hide two purposes behind this. Further, it allows the parrot drone rolling spider to fly up walls and ceilings. But keep it mind that with all the prop guards, the wheels add some extra weight to the drone.

For that, you will probably experience a shorter flight time, which you might not like. But whatever it is, if you are a beginner or still learning, you will definitely get a good experience with this.

How To Control This Mini Drone?

Once you started flying this parrot drone rolling spider, the controls will be responsive gradually. As like Parrot AR Drone 2.0, you can also control this mini-drone via FreeFlight 3.0 App. And you can download the app easily from your smartphone or tablet.

In brief, there is a “Take off” button in it. When you press the button that will automatically cause the rolling spider to enter a hover itself. There also included a pair of circles. Such as the “pitch” and “roll” circle buttons. You have to press the button “pitch” for forwards/backward motion. And use the “roll” during side to side motion. Additionally, a left circle included too for acceleration/deceleration (throttle) use. As well as you can control the drone like clockwise spinning by the “yaw” circle.

However, when you download the app, you will also get an “Emergency” button. And when it pressed, there will prepare an immediate emergency descent for the quadcopter. Don’t you think this is super useful? Well, of course, it is. Because it will save when you’re losing control or about to crash of the drone. So finally a great use of this app about your flight, including battery life.

1. Reader question: How to charge it?

Answer: The parrot drone rolling spider comes with a USB cable and you can plug it into your computer USB port.

2. Reader question: How long does it take to charge?

Answer: It will take around 45-50 minutes to charge.

3. Reader Question: Is there a camera on this one like the jumping sumo?

Answer: Yes there is a camera pointing straight down.

4. Reader Question: Is the battery easy to remove for charging in a charger?

Answer: Yes, you really just need to lift up a piece of plastic and then pull the battery out.

5. Reader Question: What is the average flight time?

Answer: The charge lasts up to 8 minutes and full recharge in probably one hour.

Customers Overview of This Product

In the meanwhile, many real users talked about the good and bad about this parrot drone rolling spider. So I tried to bring the both image in front of you to take you a fair choice.

A delightful user named Xguedox said “I wanted something that was advanced, smartphone controlled and compact enough to fly indoors and outdoors as well. So this Parrot drone rolling spider is absolutely perfect for that”

Another happy user who just started to fly is very happy with this. He said “I have had mine for two years now. And after flying and crushing plenty of times, its still going. Very stable and the controls are very responsive once you’ve spent the time to learn them. And the cost is a hobby like flying this fun device”

Though few people gave some negative comments with so many positive ones. Someone claimed “It is really fun to fly, great product but has a very short battery life”

There are many cheaper beginner quadcopters in the market today. But only this Mini Parrot Drone Rolling Spider offers the protection of the internal parts and propellers. And you will not get this super cool feature in another beginner quadcopter under $100. In particular, you’ll be happier when you found it is super easy to control and fly.

Especially thanks to its sensors which remain stable while in the air. In spite this, you should be still careful about flying in the wind. In overall the parrot drone rolling spider is extremely good fun, also entertain a family without causing too much damage.